Imagine living in a world where you did not have access to artificial colors – the color wheel, paints, computer screens, and so on. Imagine living, say, in ancient Greece. Would you use such words as “blue” or “green?”

As it turns out, the ancient Greeks do not seem to have described colors such as “blue” and “green.” To be sure, they perceived blue things all the time – the sky and the sea to name just the more ubiquitous elements – but they seem to have lacked words that described these elements according to color. Theophrastus, a student of Aristotle, wrote a treatise about stones, and he describes lapis lazuli with the word kyanos. Surely this stone which is so famous for its deep blue color would have been described as blue. But Homer also describes Hector’s hair as kyanos. Are we to think that Hector had blue hair? 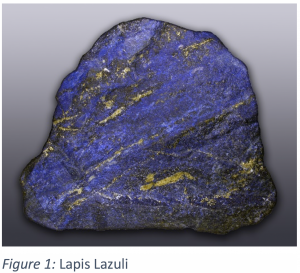 Similarly, the ancient Greeks used the term chloros which we translate as “green.” We are told, for example, that our term “chlorophyll” comes from the Greek chloros (green), and phyllon (leaf). But ancient Greek texts just as readily describe honey as chloros. Likewise, Pindar uses chloros to describe morning dew while Euripides uses it to describe tears and blood. And just as we think we’ve uncovered the pattern here – all these objects are liquids – Homer complicates things further by describing a nightingale also as chloros.

As it turns out, neither kyanos nor chloros have anything to do with colors but rather qualities. Kyanos meant dark. Thetis, the mother of Achilles, was known to have a kyanos veil which is also described as the darkest garment. Chloros meant moist and fresh or alive.

These associations persist even in today’s world. Look up the word “freshness” in an image search, and you’ll know what I mean when you see the proliferation of green in the search results. We continue to use such expressions as “seeing red” to describe anger. But at some point in the early modern era when cross-oceanic trade allowed European artists to access enough pigments to create the color wheel, our perception of colors began to change. With it came an entirely different focus on colors. Our light blue sky used to be the brazen or iron-colored sky to the ancient Greeks. Their “wine dark sea” became our “deep blue sea.” They once emphasized qualities such as vivacity, darkness, and depth when describing objects; we tend to approach those same objects armed with expressions borrowed from the color wheel. 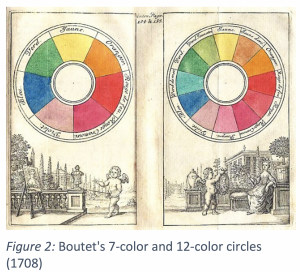 Until relatively recently, anthropologists had assumed that the eye of the ancient Greeks was structurally different from ours. They assumed that ancient Greeks had a genetic condition of color blindness. But our exploration of their texts and their vocabularies reveals that the ancient Greeks paid attention to different qualities of objects and elements. The differences in our vision and theirs is a cultural difference and a technological one as well. Without the color wheel developed in the early modern period by such scientists as Isaac Newton and Claude Boutet we may have had a completely different concept of our world.

Rene Descartes once wrote that “we do not describe the world as we see it, we see the world we can describe.” It is quite fitting that this writer from the early modern period – a period in which our ideas and attitudes toward colors were changing in dramatic fashion – should describe this cultural phenomenon so perceptively. Whether we are scientists, artists, or thinkers, we are called to pay attention not just to the world but also the way we describe that world. Our descriptions matter more than we might think.